For Opening Ceremonies, An Olympic Secret Is Hard To Keep

With the London 2012 Opening Ceremony just days away, armies of costumed performers are rehearsing in Olympic Park.

In the bowels of the stadium, dancers, acrobats and actors wait patiently for their turn on the field. Gentlemen in top hats use cellphones to take pictures of each other. Chimney sweeps step outside to have a smoke. In the stands are thousands of people lucky enough to have scored tickets to watch dress rehearsals.

And yet, director Danny Boyle and the London Organizing Committee are urging people in the know to "Save the Surprise" of what treats are in store during the opening show. There's even a Twitter hashtag: .

Boyle has revealed some themes of the show, called Isles of Wonders. For instance, there'll be a farm scene and "clouds" that produce rain. And Boyle has said he wants to show many sides of his country.

A volunteer stationed outside the stadium had a slightly different view.

"How many cliches can you pack into one show?" he asked. But he noted that the crowd cheered loudly after one segment. "They love the Industrial Revolution, don't they?"

Nonetheless, Boyle is urging fans and participants not to use social media—or anything else—that would ruin the surprise for viewers around the world.

Well, tell that to the British press. (SPOILER ALERT!)

A recent Sunday Timesheadline read: "Spit-spot! Poppins to send Voldemort packing." Use your imagination on that one. And there are lots of photos to be had. The Daily Mail, for instance, published an online picture of women dressed as nurses. I took one of them, too.

It's just hard to keep a secret among, literally, thousands of people. Especially when the rehearsals are just a quick bus ride from the Main Press Center.

Last night, while some Olympic volunteers politely ushered me into the stadium, members of the "Costume Team" shooed me away from their troops. Rhiannon Morgan, a 25-year-old professional dancer, practiced in a hallway. She'd auditioned for her part and was happy to talk about "the energy" of the show, and what a thrill it was to be a part of it.

Meanwhile, two women nearby said they couldn't divulge a thing.

Well, let's not be so sure about that. 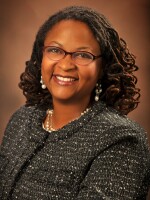 Vickie Walton-James
Vickie Walton-James is Chief National Editor for NPR News. She oversees a desk of more than 40 reporters, editors and producers based in Washington, D.C., and in more than a dozen bureaus around the country. National Desk correspondents cover domestic breaking news and beats that include immigration, criminal justice and national security across all NPR platforms. Before assuming her current position in 2014, Walton-James was the network's Deputy National Editor and held other senior management positions.