Maine's governor issued the state's first posthumous pardon this month, acknowledging that state officials had framed a lawyer after he tried to win legal rights for one of the state's tribes. Reporter Erin Slomski-Pritz has the story.

ERIN SLOMSKI-PRITZ, BYLINE: Governor Janet Mills took a step towards making amends with the Passamaquoddy Tribe when she issued a pardon for one of the tribe's advocates, the late attorney Donald Gellers.

JANET MILLS: Many have long claimed that a motivation to arrest Mr. Gellers was not just to enforce the state's criminal laws but also to thwart his outspoken political and legal advocacy. Well, after reviewing the historic record of this case and all the documents we could find, I feel there's merit to that claim.

SLOMSKI-PRITZ: Gellers moved from New York to Maine in 1963. He knew he was taking a risk when he began to work for members of the Passamaquoddy Tribe. It was a time when Maine treated tribal members as second-class citizens without basic human rights.

COLIN WOODARD: And suddenly into the scene came this Don Gellers, a idealistic attorney who was not shy about trying to cure injustices and would do it in a way that ruffled the feathers of the authorities around, and he didn't care.

SLOMSKI-PRITZ: Colin Woodard is a reporter for the Portland Press Herald. He says Gellers helped tribal members retain custody of children who had been taken by the state. Mary Creighton is Passamaquoddy.

MARY CREIGHTON: I was looking for an attorney to take a case for me.

SLOMSKI-PRITZ: She says that Donald Gellers helped her in a drawn-out custody case.

CREIGHTON: He saw me through all of this without charging me a penny.

SLOMSKI-PRITZ: But Woodard says his most significant work was with Passamaquoddy chief George Francis.

WOODARD: And the alliance that those two took up to defend the Passamaquoddy rights would transform not only the Passamaquoddy's story but the whole story of all of the tribal people east of the Mississippi by eventually transforming federal law.

SLOMSKI-PRITZ: The stakes were high. Maine would eventually pay millions for the land that had been taken from the tribes. The tribes would receive federal recognition, but other attorneys would have to take the case to court because on March 10, 1968, the same day that Gellers filed the initial lawsuit on behalf of the tribe, he was arrested on a marijuana charge. It wasn't a coincidence. Shortly after, attorney Harvey Silverglate had drinks with a Maine assistant attorney general who openly admitted his office was behind the arrest.

HARVEY SILVERGLATE: As I listened, it seemed to me it was less of a plan and more of a plot to disable Gellers from representing the Indians. And I was quite horrified.

SLOMSKI-PRITZ: It was a conspiracy in plain sight. The state's attorney general's office prosecuted the case even though it was a minor charge. Governor Mills says Gellers would have gone to prison.

MILLS: Mr. Gellers instead left the country and went to Israel without the state ever trying to stop him or extradite him back from Israel or later from New York state.

SLOMSKI-PRITZ: In Israel, Gellers was allowed to continue his work as a lawyer. He died in 2014. Governor Mills not only pardoned Gellers, she acknowledged an ugly chapter in Maine's history. For NPR News, I'm Erin Slomski-Pritz. Transcript provided by NPR, Copyright NPR. 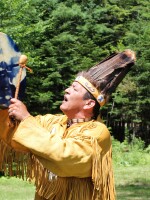