'Calling My Children' And The Faces Of AIDS

Photographer began documenting stories about AIDS in the late 1980s and became well known for humanizing the epidemic for various publications, including Life magazine and The Philadelphia Inquirer.

Over the course of 25 years, Binder has approached the subject from different angles: By spending time at Camp Sunburst, a program for families coping with AIDS; and with a former drug user turned activist, who started an underground needle-exchange program; and with a Playboy model struggling to live with the disease.

Binder's long-term documentation of Gail Farrow and her family deftly shattered readers' perception of the epidemic. Farrow, an African-American mother of four, contracted AIDS through a blood transfusion, defying the stereotype that only prostitutes, homosexuals and drug users were vulnerable to infection. She died in 1989.

Calling My Children, Binder's documentary about Gail and her family, will be screened Wednesday night at the U.S. Capitol in conjunction with the 19th International AIDS Conference. Watch the video to hear Binder's own words about this moving body of work. 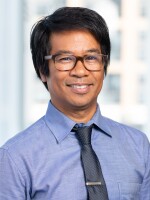 Ben de la Cruz
Ben de la Cruz is an award-winning documentary video producer and multimedia journalist. He is currently a senior visuals editor. In addition to overseeing the multimedia coverage of NPR's global health and development, his responsibilities include working on news products for emerging platforms including Amazon's and Google's smart screens. He is also part of a team developing a new way of thinking about how NPR can collaborate and engage with our audience as well as photographers, filmmakers, illustrators, animators, and graphic designers to build new visual storytelling avenues on NPR's website, social media platforms, and through live events.
See stories by Ben de la Cruz