The moon is new today. Long ago, when folks talked about the new moon, they meant that very slender crescent that could be seen at sunset. When it was sighted, the month began, and a complete cycle of moon phases took about 29 and a half days - one month, or as they used to say, “one moonth.” But watching for this new moon was an imprecise way to mark time. People in different places might see it at different times. So astronomers redefined the new moon as being the time when it was most directly between the earth and the sun. But at this point in its orbit, the moon is out of sight, its face in shadow. So now, 'though the new moon phase is much more precise, it’s the one time of the month when you can’t see the moon at all. But starting tomorrow night, you may be able to find it as a very thin crescent low near the western horizon. And on Friday night, it will appear near the planet Mars! 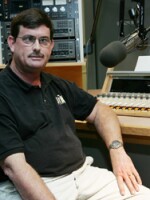